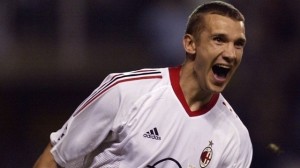 This is Shevchenko for me. The defining moment, the most heavily etched memory of him in my head. Whenever he’s mentioned, I recall this moment. Maybe because I was doing the same at the time, and what a time it was.

I turned fourteen that day, 27th of May 2003. Relatives came to visit during the day and the night was spent out with friends. I had every reason to be excited at the time. First of all, it was my birthday, turning 14, meaning that from September I’d be in High School, all grown up. Second, the next morning, I’d set off to a lake resort with my entire school for a three day stay. You know what that means – experimenting with alcohol and girls. Things would be good. But the entire day, the 27th, one thing was making me more excited than anything. The Champions League Final against Juventus was tomorrow. My birthday wishes were for us to win Big Ears, bugger me and my hormones.

When the day came, we went by bus, first to a mountain town on the way to the lake. I was not feeling well. The trip was not long, but with the final on my mind and the atmosphere around me got the best of me. The cheap vodka I had while in town didn’t help either. By the time we got to the lake and got settled in the hotel, I was feeling seriously ill. Barely able to stay conscious. God knows I needed sleep, but I was afraid I’d miss the match so I rolled around in bed while my friends drank and smoked in my room. I tried too but both the cigarette and the drink made me want to vomit. Decided to cut the drink and kept smoking to a minimum.

As the game started, I was more than dizzy. Tired and ill, I must admit, I followed the game like it was a dream. To be honest though, the situation was surreal. Me, face a mixture of red and yellow, smoking a cigarette while laying in bed, wearing my ’94 Milan shirt and my scarf around my neck surrounded by a bit drunk teenage boys and girls. Yeah, the room I was in (4 kids shared the same room) was the official football room with more than 20 people in it at all times. Almost all of them cheering for Milan, mostly because of me. Especially liked the fact that the girls decided Milan had the better looking players and made their “loyalties” known.

During extra time, I began to regain consciousness. At the penalties, I was standing, hugging whoever was next to me, looking excited. However, I was scared shitless. If Milan lost, my “life” was ruined. It would all go horribly horribly wrong, when it could have gone so good. Here I was, sick, most probably unable to enjoy myself like I had planned, a penalty shootout loss away from total collapse.

When Sheva took the ball to the spot to shoot, I couldn’t bear to watch. I covered my eyes with my hands, but peeking. My heart was racing so fast. I knew it wasn’t over if he missed, but it would have killed me if it went on. His panic look mirrored mine. He shot the ball, and it went in. Sheva went mad with joy, and so did I. I don’t know where that strength came from me, since I was weak as a baby a few moments ago, but when I saw him run, I started running. I jumped from the bed amidst all the congratulatory hugs, and dashed out of the room, running through the hallways, screaming with joy. It seemed like a lifetime, while it was probably closer to 5 minutes of running. Upon which I promptly collapsed and lost consciousness.

When I woke up, a teacher was with me, and some of my friends. She said I needed to be taken to a doctor immediately. Personally, I couldn’t care less. We were Champions of Europe. Me, Shevchenko and Milan. Didn’t bother arguing with her, she took me with a car to a local hospital as an emergency. A friend and the girl I liked came with us too. Turned out I had a hell of a fever, with a body temperature of 40.2 Celsius. I was dehydrated and was put on a course of fluids and injections. Stayed the night there. Again, couldn’t care less.

Champions of Europe. Me, Shevchenko and Milan.

This post was written by Marcus. Give us your feelings and thoughts of that night? Here are Sheva’s own: