Newspapers have run out of ink. Television channels have basically no free time to fit any new shows. Why so? The glamorous football teams and their highly paid first team players have stolen the attention of everyone around the world. In the light of that, has anyone wondered what happens next to that spotlight? What about those who contribute to the development of the team one way or another? The medical staff helps the team on a health perspective. The sub-coaches help the players develop their skills and improve their game. But wait, what about those who are supposed to inherit the positions of players such as Alessandro Nesta? Gennaro Gattuso? Massimo Ambrosini?  How much do the Milan fans around the world actually know about the youth teams of their favorite team? How many youth teams are there? What are the rules that are applied in their respective leagues? How many times have these youngsters held the trophies in their hands at the end of each season? 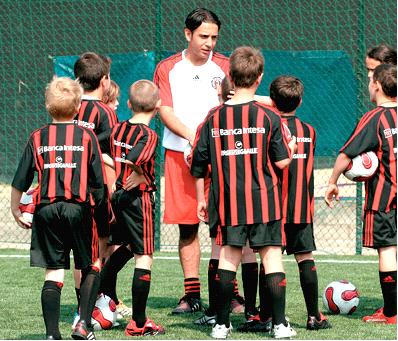 AC Milan has 11 different youth teams, each for different age groups. Primavera (see below for detailed information about the team) is the highest age group of all being the Under-20 team. It is followed by Beretti (Under-18), Allievi Nazionali (Under-17), Allievi Regionali (Under – 16) and Giovanissimi Nazionali (Under-15). There is also the Giovanissimi Regionali A (Under-14), Giovanissimi Regionali B (Under-13), Esordienti 1999 (U-12), Esordienti 2000(U-11), Pulcini 2001(U-10), and last but not least Pulcini 2002 (U – 9).
Every youth team in these groups has its own head coach, assistant coach and a goalkeeping coach (few of those teams have similar coaches).

All the youth teams, with the exception of the Primavera, train in the Vismara Sporting Center located in the southern part of Milan. This sporting center has 7 fields covering 57 acres. The Primavera however trains at Milanello (like the first team).

The latest honor the youth teams accomplished (bar Primavera) was the 2008/2009 Scudetto the Beretti won.

Before we go through the AC Milan Primavera in details, one must understand the league in which the Primavera play, its structure and rules as it is a tad different than anything we are familiar with and you will see why in a minute.

Campionato Primavera TIM is for the Primavera what Lega Calcio is for Serie A teams. The name “Giacinto Fachetti” (former Inter Milan captain and chairman) is attached to the league name as a memory of the Inter Milan legend. The league has the Primavera teams of all Serie A and Serie B clubs adding to a total of 42 clubs. These 42 clubs are divided into three groups (14 teams in each group). The 14 teams in each group face each other in a home-away basis similar to that of the Serie A. This first stage is called the play-offs. The top 5 teams in each group qualify to the next round alongside the best 6th team of the 3 groups, making a total of 16 teams in the next round (final round of qualification). The top teams in their respective groups, alongside the 2nd best teams of the three groups and the two of the third best teams of the three groups (example Milan – Inter – Juventus all ended third in their respective groups. Two of those will be taken judging from the points earned, goals scored, goal difference, etc.) will be put in one “bowl” where as the other 8 qualified teams will be put in another. One team from each bowl faces the other, but the teams that will face off in this round should have qualified from different groups (similar to the system applied by UEFA for the European Champions League). The home-away system is applied here as well. Then there is the final phase. The final phase is made up of quarter-finals, semi-finals, and finals. Only one match (per 2 teams) is played in each of these 3 final rounds. If the first teams in the first rounds and the second teams are still in the competition they would be considered as the “seeded” teams and thus cannot meet each other in the following rounds. The seeded teams and the rest of the teams are coupled together by means of a random draw (the matches of the semi-finals would be drawn as well). Additional time and then penalties are the solution if any match ends in a draw. The winner of the last match will win the Campionato Primavera TIM.

Now that you have got hold of how the Primavera league works, let’s continue. All players that participate in this tournament must be Under-20, but two players above that age are allowed to play in the elimination rounds.

The AC Milan Primavera hasn’t been the most glamorous side when it comes to trophies. Fact remains, the it has only managed ONE Scudetto since 1965 (just 3 years after the tournament started). They have also managed to win the Coppa Italia Primavera 2 times, the last being last season. Torneo di Viareggio was won by the Primavera a whooping 8 times. The numbers though tell just a small portion of the story. Some of Milan’s greatest players have came out through the ranks of the Milan youth and played with the Milan Primavera. The most notable names are Franco Baresi, Paolo Maldini, Allesandro Costacurta and Demetrio Albertini. All four players have helped made Milan the great team it is. Both Maldini and Baresi are considered two of the best defensive players (LB – CB respectively) that have ever played the game. Costacurta comes close to these two as well.

At the moment, the Primavera is being coached by Giovanni Stroppa, with Filippo Galli as director of the Youth system. Franco Baresi, Capello, and Galli himself have all coached the Primavera at one point in their lives.

It’s clear that as of lately, the AC Milan management has shown great interest in these youth teams and dedicated a huge sum of money in order to buy potential world class players for the future. This might have to do with the fact that football has become a business and the only way Milan can continue challenging and not spending huge sums is by applying that very philosophy.  I personally have found great interest following the youth team’s results whether they were bad or impressive. The thing is that results aren’t what really matters in these young ranks; what really matters is the development of the players. It may take a coach a lot to find the right position for each player to fulfill his potential and exceed it. That coach might have to handle players that have the talent but aren’t willing to take it to the next step. Some players just need a little more attention than others; after all these are very young human beings. That being said and all, one can’t expect to have 11 starting players from the Primavera come into the first squad and be world class players. Milan would be rather lucky if they had 2 world class players from these squads, but these two can prove very vital. Why so? They basically came from the Milan ranks and thus they know the atmosphere and everything in Milan. They’d have that “Milan spark” in them which money can’t buy. You need a “Zlatan” in your team, a “Ronaldinho” as well, but without a “Maldini” you can’t really dominate. The key to Milan’s success has always been the combination of both. That just highlights the importance of having these youth teams and concentrating on injecting everyone’s efforts into bringing the best out of the kids in the teams.

The interest Galliani showed towards this section has already produced some impressive results. Rodney Strasser and Alexander Merkel are both Primavera products and have stepped into the Milan starting eleven on few occasions, but have impressed. Even at their young age and the fact that they came into the team with a lot of pressure on their shoulders to impress, they managed to do just that and even more. Now, what needs to happen is for Allegri to give these youngsters chances even if they commit errors – its part of maturing as a football player and a human being as well.

There’s something about following these youngsters that really injects into me the energy to follow them even more. I knew Merkel before most Milan fans out there. Watching him play in the Fly Emirates thrilled me. For some weird reason, it felt like I had scouted that player (and all the Primavera players that participated). I suggest you follow them too; even if it’s just through the results and blogs, it’s worth it. These guys might be the next “Maldini”, “Ambrosini”, “Inzaghi”, etc. These guys, as well, hold the future of Milan in their hands. You may say I’m overreacting, but I’m not. If/When the UEFA financial regulations come into play, then Milan need to count on these players as much as possible. It frightens me to think that a team as great as Milan is going to rely a lot on this youth sector (that hasn’t produced much great players, but when it has it did it in style), but it also brings a certain sense of excitement.  It might be tomorrow, after a month, a year or two, or even more than that that the Primavera produces yet another great player. Here’s hoping that the likes of Calvano, Fossati, Rodrigo Ely, Beretta, Albertazzi, Cristante Bryan and other young lads will lead our beloved Milan into more eras of success.