“That lad must have been born offside.”  If you don’t know who said this quote then you probably shouldn’t continue reading. Because whenever Inzaghi’s name pops up, English pundits or commentators never fail to remind us of what they think is an incredibly witty saying. Or at least they used to. In the past, Inzaghi was viewed as the stereotype Italian footballer. Diver, cheater, cunning, and obviously just lucky to score simple tap ins. Now Inzaghi is known and respected by almost everyone. Acknowledged as one of the best goalscorers in history, a master of positioning, a symbol of passion, and an ageless football legend that has won – and scored – (in) every tournament in the game.

The relationship between the normal football lover and Inzaghi was always one of jealousy and despise. He seemed untalented. A good goalscorer, but apparently anyone could have scored those easy goals, especially if he had Zidane and Del Piero or Rui Costa and Kaka supplying him. Plus his over-the-top goal celebrations and falling at the slightest contact didn’t help warm him up to the neutrals. He was always misunderstood. Inzaghi was first introduced to the English – and international – scene with Juventus in the Champions League. Back then when La Vecchia Signora had the likes of Del Piero, Zidane, and Davids on their team-sheet. Their match-ups vs Man United were classic Champions League encounters which led the two teams to become protagonists in many Pepsi adverts in the late 90s and early noughties. When United won the treble in 1999, they had to get past a Juventus side that had went 2-0 up with two Pippo Inzaghi goals. Anyway, it’s sort of ironic that to the cynics Inzaghi represents luck in every possible way, while he’s been one of the most unlucky professionals of the past generation. Injuries and unfortunate selections by coaches almost always seemed to get in his way, but over the years we have learned to never write off Inzaghi. Bury Pippo and he comes back stronger.

Milan’s number 9 first burst onto the scene with Atalanta in 1997 when he scored 24 goals in Serie A to win the Capocannoniere award. This earned him a move to Juventus which, theoretically, could have put him as Italy’s number one striker. Instead, despite winning a Scudetto and reaching a Champions League final, due to his not-so-perfect relationship with Del Piero, and the emergence of Trezeguet, Pippo’s time was up at Juventus. Maybe his time was up as well at the top. Or at least the cynics who Pippo loves to prove wrong thought so. A transfer to Milan put him alongside Rui Costa, Alessandro Nesta, Andrea Pirlo, and Clarence Seedorf as the new arrivals that would form the core of a successful and extraordinary Milan side for years to come. Carlo Ancelotti, another Juventus reject, took Milan to the Champions League final in 2003 versus Juventus, only two seasons after he and Pippo swapped Turin for Milan. Buffon denied Inzaghi the winner in the final, but Milan went home with the cup and Pippo had gained his redemption over his ex-team. As for Buffon, Pippo had already scored THAT goal against him earlier in the season.

Throughout Inzaghi’s international career, Italy almost always used a strike pairing of a classic center forward, and a trequartista. Del Piero and Totti might have been poster boys for Italy’s fading generation, but it was the Vieri’s and Toni’s that scored the goals.  Pippo made his Azzurri debut in 1997 but failed to crack into the starting 11 in France 98 in favor of his best buddy, Christian Vieri. In World Cup 2002, which was an unfortunate tournament for Italy and Inzaghi, not only did Vieri deny him a starting spot once again, but the linesman also unfairly denied him his first World Cup goal. In Euro 2000, one would think Inzaghi would’ve received the starting nod since Vieri was out injured, but instead Zoff opted for a weird rotation system between him, Delvecchio, and Montella. Despite scoring vs Turkey and Romania, and starting the semi final vs the Dutch, Pippo didn’t get a single minute in the heartbreaking final. He missed out on what was most probably his finest and last shot to become Italy’s number one center forward in a major tournament in Euro 2004, due to a nasty knee injury which came after a lethal qualifying campaign with Italy and 12 Champions League goals that lead Milan to Champions League glory. On paper his international career seemed over, but one should never write off Inzaghi. An extraordinary comeback from injury earned him a spot in Italy’s World Cup winning squad, and his first and only World Cup goal. Though it was Toni who edged him this time, Pippo’s time at the top wasn’t over yet. In fact, it was yet to come.

INJURY HEARTBREAK, COMEBACK WITH A BANG

Pippo has never been lucky with injuries. In fact, while he was at his prolific best, in 2003, injury was just about to knock on his door. He was just off a Balon d’Or worthy season with 30 goals, including 12 in the Champions League winning campaign. And was finally Italy’s leading man in the Euro 2004 qualifications, in which he also finished as top scorer for the Azzurri.  His injury woes started in December 2003, and he continued to struggle with them, failing to reach a consistent run of games until the 2005/2006 season. Many had doubts about Pippo’s ability to come back, as he had almost missed an entire year and a half while also passing his 30th birthday, but Milan stood by him and offered him a contract extension in November 2004, which was a vote of confidence that Pippo repaid well. He returned stronger than ever in late October 2005, and scored the winner on his return vs Palermo in the 78th minute. SuperPippo was immediately back in business. He continued the season in an outstanding fashion, scoring 17 goals in total including last minute winners vs Lecce and Lyon, as well as another goal vs Lyon and a brace vs Pippo’s personal favorites, Bayern. He capped off the campaign by earning a spot in Italy’s 23-man squad for the World Cup in Germany, and returned home with a gold medal. 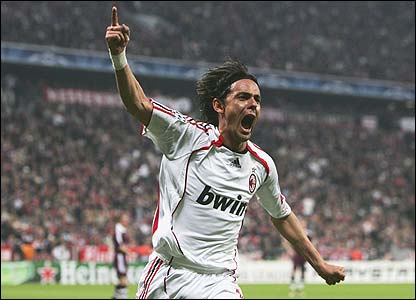 After winning the World Cup in 2006, Inzaghi returned to a Milan in crisis. Strike partner and talisman Shevchenko was gone, so was the classiest number 10 – Rui Costa, and Calciopoli had left the club’s reputation and finances severely damaged. Milan endured a difficult campaign in the league, but in the Champions League it was business as usual. It might have been Kaka who took the team through the group stages, and past Celtic, then followed by United, and undoubtedly Milan wouldn’t have reached the final if not for Seedorf’s heroics against Bayern, or Gattuso bossing United’s midfield, or Nesta leading the defense into safety, but the final was all Pippo. His moment at the top had finally arrived. Two years earlier, Milan had thrown away the Champions League to Liverpool on the cursed night, with Pippo watching from the stands. But now it was time for redemption. Milan defeated Liverpool, and got their revenge as well as the club’s 7th Champions League, while Pippo Inzaghi won over the world and booked his place in the history books with the all time greats. At the age of 33, Filippo Inzaghi had reached the most important moment of his career. That was the day he earned the respect of all the neutrals, because the Milanisti already idolized him long before.

THE PERFECT SEND OFF – ONE LAST HURRAH AT THE TOP

His legacy continued with vital goals helping Milan win the UEFA Super Cup and the FIFA Club World Cup, thus ensuring Milan and himself continued to rule the world. He continued to break goal records, passing the 300-goal mark in his career, and finishing his European adventure with 70 goals, the second best of all time. As the seasons passed by, age started to take its toll and his role started to diminish. Nevertheless, he remained clinical as ever and proved it on what was his twilight at the top stage. When Jose Mourinho was coaching Inter in 2009, he had remarked that Pippo was the striker he was most afraid of in the Milan camp. That day Pippo came off the bench to score a wonderful equalizer. Only problem is that it was canceled for offside. Which reminds me, did you know that Ferguson once quipped that “Pippo was born offside”? Of course you did, but apparently English pundits seem to think that this is brand new information. Anyway, in 2010, Mr. Mourinho was then coaching Real Madrid who were about to face AC Milan in the Champions League. Once again he mentioned that Inzaghi was Milan’s best striker and the one most likely to cause Real’s defense trouble. The press thought he was joking around, but Pippo, aged 37, came on when Milan was 1-0 down at San Siro to score twice in a magical night that demonstrated once again what man can achieve out of pure passion and determination. 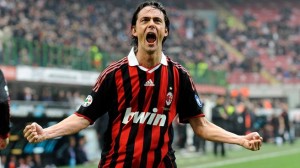 As he prepares to leave the pitch, one can’t help but stand in awe and be immensely proud of what Filippo Inzaghi managed to achieve over the course of his career. No, I’m not talking about accolades though he has them in abundance (A World Cup, 2 Champions Leagues, and 3 Scudetti are amongst the numerous trophies he won) nor about his goal records (70 in Europe, 25 for the national team, 126 with Milan, 197 in Serie A including 10 hat-tricks, 313 overall). What Pippo has achieved far exceeds all that. Boasting a technique amongst the worst in the history of professional footballers, Inzaghi based his game purely on passion and intelligence. Two elements that didn’t let him down. He couldn’t dribble, nor make a simple long pass, but desire, determination, and extremely intelligent movement were his keys to scoring. And boy did he score. There’s a reason Pippo was constantly offside Sir Alex, it’s because he times his runs off the last defender’s shoulder. He gets called offside many times each game, but the one time he’s through cleanly, it’s a guaranteed goal. He scored with every part of his body: right leg, left leg, headers, shoulders, stomach, you name it. He scored lucky goals, freak goals, easy goals, offside goals, and whatnot. But he also scored Champions League winning goals, derby goals, last minute winners, and tons of goals that will forever be carved in the memories of fans. Pippo Inzaghi may have been born offside, but he was born to score.

He burst into fame as a loathed cheating ‘lucky’ goalscorer, but bows out as a legend of the game, an idol amongst Milan fans, and one of the best Italian footballers in history. He can leave without any regrets, and with his head held high. He played for the fans, and never ever let them down. There’s a reason why such a technically limited footballer is idolized by millions of fans and respected by everyone else, it’s his passion. His desire. His dedication and hard work. Pippo lived to score and you could see in his celebrations how much he enjoyed putting the ball in the net by any means possible. Football will never forget Pippo Inzaghi. Goodbye you champion, you taught me how to live life. 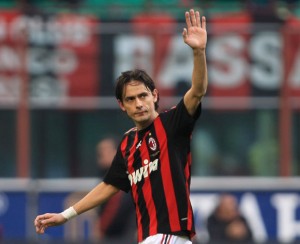